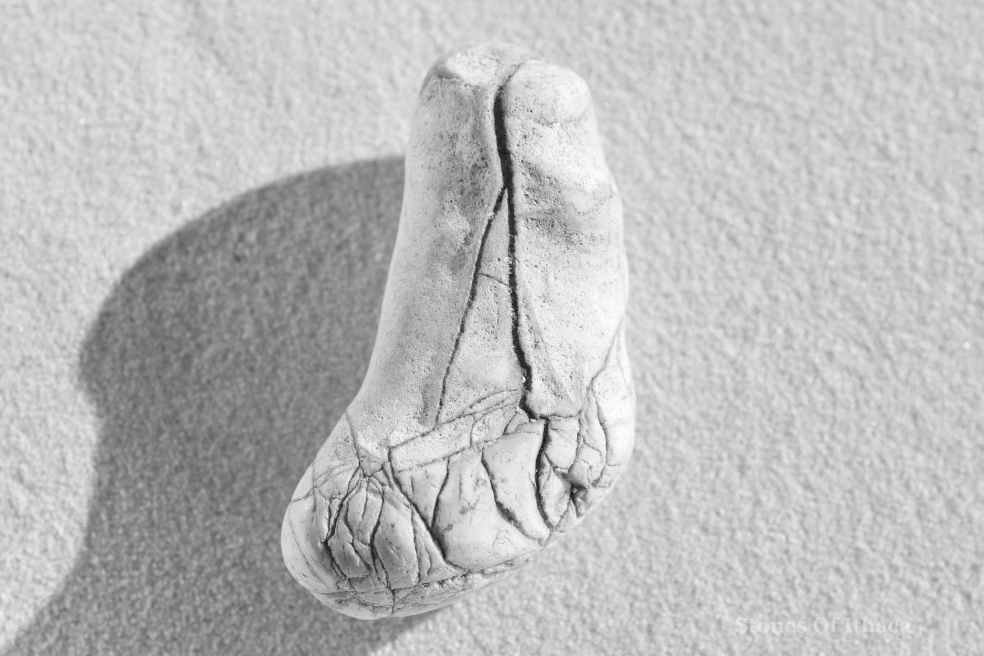 This stone is tectonic. One can almost see the plates of the Earth being crushed together. And the deep vein of the Mariana Trench reaching upwards. Of course, the plates – faces of passengers on the London Underground being squashed together – can also represent the waves of the sea, on which there is a boat, a yacht, whose mast is the Mariana Trench and whose sail is a letter, A. This ship is held down to the ocean floor by the trench, a kind of umbilical cord. It may strike us as flimsy, kindling waiting to be splintered and thrown on to the fire, or fragile, like a matchbox. And yet it is held down, connected. It will travel to and fro across the surface of the ocean, and mirror the ocean floor.

Meanwhile, in language, there are some wonderfully expressive connections between words. Let us take the example of a pudding, “trifle”, which without the e spells “flirt”. Or let us look at the word “plot”, which in reverse, keeping the consonantal cluster together, spells “topple”. One of my favourites is “episode”, at the end of which there is often a cliffhanger and the story is left awaiting an outcome, “poised”. Opposites are never far away, and I am intrigued by the proximity of the archetypal white and black birds – “swan” and “raven”. They are actually connected by the alphabetical pairs r-s and v-w, addition of e. Opposites can attract or repel, like the poles of a magnet. Word connections can also define, but they are not always obvious. “Roam”, for example, spells “alone” (phonetic pairs l-r, m-n, addition of e), but “alone” can also be found in “belong” (alphabetical pair a-b, addition of g), as can “noble”. And here’s a riddle to end with: what does a “plug” do when it’s finished? “Gulp”, of course.